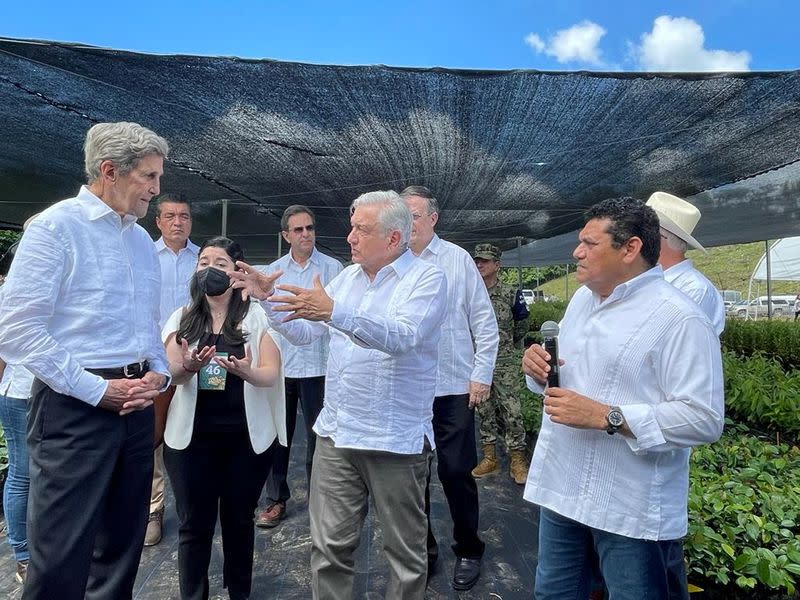 “Mexico’s industrial base, already deeply integrated with the rest of North America, should definitely benefit from the energy transition,” Kerry said alongside Mexican President Andres Manuel Lopez Obrador in the Mexican state of Chiapas, near the southern border with Guatemala.

Kerry traveled to Mexico to meet with his counterparts ahead of the upcoming UN climate conference COP26 in Glasgow, Scotland, which neither Lopez Obrador nor his foreign minister are expected to attend.

“When we move from gasoline vehicles to electrified vehicles, there will be a lot of good paying jobs here in Mexico because of the link between the auto industry and our two countries already,” said Kerry, who visited a project. reforestation lighthouse promoted. by Mexico.

While the Biden administration has stressed the need for more aggressive action to combat global warming, negotiations for a U.S. bill to invest up to $ 3.5 trillion to expand social programs and fight climate change is still at stake, with some Democrats resigning themselves to the growing likelihood that a proposal to cut carbon emissions will be weakened or dropped.

“We will support the plan that President Biden is promoting through Mr. John Kerry.… President Biden has an ally to advocate for climate policy to deal with climate change,” said Lopez Obrador, without giving details.

However, the Mexican leader cut the budget of his environment ministry as part of an austerity policy and dismantled policies favoring private investment in renewable energies.

The Climate Action Tracker research coalition ranks Mexico’s comprehensive climate plan as “highly inadequate,” saying its policies and actions “will lead to an increase rather than a decrease in emissions and are not at all compatible with the limit. temperature of 1.5 ° C of the Paris Agreement. “

Lopez Obrador says he will tackle carbon emissions by revitalizing dilapidated state-controlled hydroelectric projects and through the tree-planting program, called Sembrando Vida, which aims to plant 700,000 trees and employ 450,000 farmers.

But he has also focused on reviving state-owned oil and power companies, and his government has prioritized fossil fuels over renewable energy sources for Mexico’s national grid.

Your money: five tips for getting the best rate on a personal loan