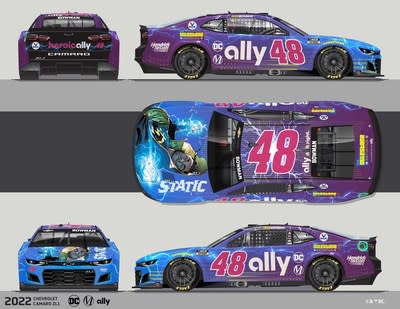 Announced in 2021, The Milestone Initiative is a collaborative program between Ally, DC, Milestone Media and Warner Bros. Discovery to mentor and train the next generation of Black and diverse comic book storytellers, both professionally and financially. Founded in 1991, Milestone Media is the premier black-owned media and comics company famous for creating superheroes. Static, Icon & Rocket, Materialand Blood Syndicate. DC is the publishing partner for Milestone comics; the company originally released titles under the Milestone imprint from 1993 to 1997, then renewed the relationship in recent years and released new, updated versions of their core Milestone Super Heroes.

Designed in conjunction with DC’s Creative Services team, the car features Milestone Super Hero Static to increase awareness and interest in The Milestone Initiative among NASCAR fans. As Milestone’s electric superhero, the designers leaned to incorporate Static’s electric effects into the overall design, with the electricity emanating from the character’s hands on the hood being integrated not only into the paint scheme , but also in the fire suit and the helmet. The Milestone initiative, sponsored by Ally, continues the mission of the founders of Milestone, ensuring a pipeline of diverse creative talent who can have an incredible impact on our culture through storytelling.

“Ally believes representation is important, which is why we’ve partnered with Milestone Media, DC, and Warner Bros. Discovery to share the stories and history of Milestone Comics with a new generation,” said Andrea Brimmer, director of marketing and public relations for Ally. “We are committed to being a catalyst for change and celebrating diversity in everything we do. We hope this incredible paint scheme, featuring an iconic black superhero, helps make the sport we love a space more inclusive for all.”

“Since its inception, Milestone has always been about mentorship, storytelling and changing the paradigm in comics and entertainment through our characters,” said Milestone Media partner and award-winning producer. Reggie Hudlin. “Having both The Milestone Initiative and our most popular superhero represented on the NASCAR stage is an incredible opportunity to share our vision and expose our mission to a new and evolving audience.”

“Working with Ally and Milestone Media on The Milestone Initiative has been an incredible experience,” said Anne De Pies, DC SVP and General Manager. “DC and Milestone are passionate about inclusive storytelling that speaks to everyone and being able to share this #48 car message with NASCAR fans in addition to our core comic book fans is a great opportunity.”

“Ally is doing a really good job of bringing the NASCAR community together and having Static on the car is another way Ally is doing it right,” said No. 48 driver Bowman. Ally Chevrolet Camaro ZL1. “I think it’s really cool to have a superhero on the #48 Chevrolet Ally at Atlanta and being able to contribute to Ally’s goal of making NASCAR more inclusive is a unique opportunity that I’m proud to be a part of.”

For more Ally images and news, please visit http://media.ally.com. For more information about The Milestone Initiative, visit the website at www.dcuniverse.com/milestone. For the latest news on all of DC’s Super Heroes, visit the main site at www.dccomics.com, and follow @DCComics and @thedcnation on social media. The DC UNIVERSE INFINITE digital subscription service offers a combination of classic Milestone titles from the early 90s, as well as some of the current comic books available at comic book stores. DC UNIVERSE INFINITE is not intended for children and is not available in all countries. For more information and a free trial (if applicable), see www.dcuniverseinfinite.com.

Ally Financial Inc. (NYSE: ALLY) is a digital financial services company that delivers on its promise to “do it right” for its consumer, commercial and enterprise customers. Ally is comprised of an industry-leading independent auto finance and insurance operation, award-winning digital direct banking (Allied bank, Member FDIC and Equal Housing Lender, which offers mortgages, point-of-sale personal loans, and a variety of deposit and other banking products), a consumer credit card company, a business for equity sponsors and middle market firms and securities brokerage and investment advisory services. Our brand belief is that we are all better off with an ally, and our goal is to help our customers achieve their strongest financial well-being, a personalized notion of what’s important to them. For more information, please visit www.ally.com and follow @allyfinancial.

For more information and disclosures about Ally, visit https://www.ally.com/#disclosures.

DC is one of the largest publishers of English-language comics and graphic novels in the world and home to some of the most iconic and recognizable characters ever created. As a creative division, DC is responsible for strategically integrating its stories and characters into film, television, consumer products, home entertainment, interactive games, and the DC UNIVERSE INFINITE digital subscription service and the community engagement portal. For more information, visit dccomics.com and dcuniverseinfinite.com.

Definition and how to use them

No, auto loan arrears and repos are not “exploding”: they have gone from record highs…