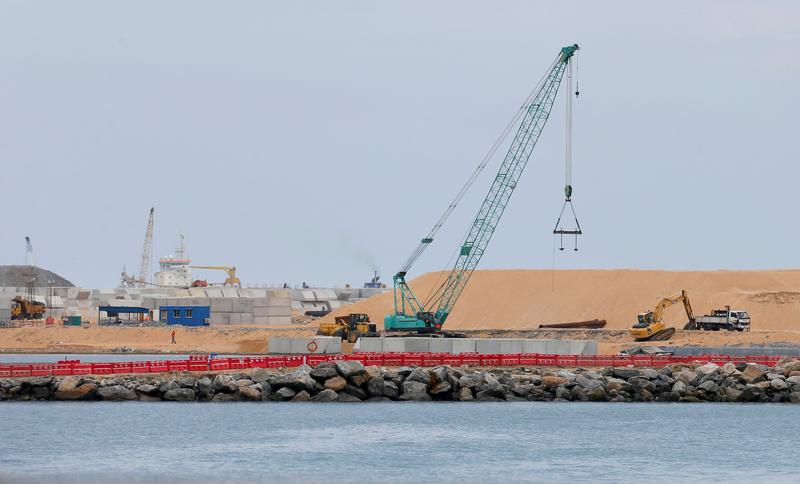 A hospital and clean water: China on the charm offensive in Sri Lanka

The hospital, which specializes in kidney disease, is helping China win popular support in a country where its megaprojects have raised debt and raised concerns about excessive economic and political leverage.

Aquatic plants and a Chinese radio station promoting its economic and social programs are part of the campaign to win over skeptics.

China has invested about $11 billion in Sri Lanka, about $8 billion in loans tied to Xi’s signature “Belt and Road Initiative” designed to boost trade and transport links across Asia. Chinese companies, employing thousands of local workers, have built a giant port and also plan to build power plants and highways.

But the terms of some of those projects have drawn criticism from politicians in Sri Lanka and abroad and led to policy reversals that have stalled China’s ambitions on the Indian Ocean island.

“We … expect our companies to help the people of Sri Lanka with donations and corporate social responsibility work,” Chinese Ambassador to Sri Lanka Cheng Xueyuan said last month after inviting local reporters on a tour of major Chinese investment projects on the island.

The charm offensive can pay off.

Gotabaya’s brother, former President Mahinda Rajapaksa, courted China in the aftermath of the 26-year civil war against Tamil separatists that ended in 2009.

Much of the world has fled Sri Lanka, accusing the Rajapaksas of widespread human rights abuses during the conflict – allegations they deny.

China has seized the opportunity to develop a vital step to much of Asia, Africa and beyond.

Ties deteriorated in 2015 with the election of Maithripala Sirisena as president. Suspicious of China’s growing influence and growing debt, he suspended all Chinese investment projects, citing allegations of corruption and overpricing.

Sirisena finally allowed the projects to resume the following year, although he demanded changes to some terms.

During his inauguration on Monday, Rajapaksa said Sri Lanka did not want to be drawn into a regional quest for influence. China’s expansion has come at the expense of India, traditionally Sri Lanka’s economic and diplomatic champion.

“We want to remain neutral in our foreign relations and stay away from any conflict between world powers.”

But shortly before her election, councilor Palitha Kohona told reporters that Rajapaksa would “restore relations (with China) to where they were.

“I guess the idea was that if we upset China, the West would come at us with endless bags of gold… But the bags of gold never materialized.”

In Polonarruwa, where the kidney hospital is due to open early next year, families say their struggle to get treatment should ease once they have an alternative to overburdened local hospitals.

“It’s really a good project because of the number of people who are suffering in this region. Right now we are struggling for routine checkups and dialysis,” said Lakmal Prasad, 27, a former state employee who has previously undergone a kidney transplant.

China has also completed two water facilities in an arid part of the island, while a third, larger one is nearing completion and will provide drinking water to villages in the Puttalam area.

But China’s greatest interest is in megaprojects. The new southern port of Hambantota, near one of the world’s busiest shipping lanes, cost $1.4 billion and kicked off a major post-war construction boom.

It also raised fears of a “debt trap”. When Sri Lanka was unable to repay the loan on the port, it was forced to cede control to China on a 99-year lease in 2017.

Ambassador Cheng said China’s construction frenzy had created up to 100,000 jobs on the island of 22 million people and more opportunities were opening up.

To help spread the message, a Chinese public radio station airs reports on Chinese-backed economic and social programs in Sri Lanka in the local Sinhalese language.

It also offers Chinese lessons to help the growing number of Sri Lankans working with Chinese, from grocers to bank managers.

Last week he featured the story of a Sri Lankan man who started working with Chinese telecoms equipment maker Huawei in Sri Lanka a few years ago and the company moved him to Shanghai .

The next big-budget projects China wants to develop include a billion-dollar central highway linking the capital Colombo to the central district of Kandy, a 15,000-hectare investment zone in Hambantota and oil refineries.

China Harbor Engineering Company is already building a $1.4 billion port city next to the port of Colombo, designed to be a financial center with hotels, marinas and even a motor racing track on land reclaimed from the sea.

“Their focus has been relentless; even in the past few years, their projects have all come to fruition. There is no one stopping them, in the end,” an Asian diplomat said. “But they also do a lot more soft power diplomacy.”

To explain the scale of the Belt and Road initiative, Beijing took Sri Lankan politicians, journalists and local residents on a tour of China.

Muhshi Rahmathullah, a former councilor in the northwest town of Puttalam, where China Machinery Engineering Corporation built a 900MW coal-fired power plant, said he was among a group of 15 people who completed a company-sponsored tour of China.

The Puttalam plant meets half of Sri Lanka’s electricity demand, but some residents have objected, saying it has caused air and noise pollution.

“They showed us power plants and said there would be no impact on the environment,” Rahmatullah said of his trip. “They wanted to show how power plants contribute to the development of the country.”